In a nutshell, I’ve spent most of my career leading digital application development teams and creating innovation-positive work environments in technology companies. For the last 6 or 7 years, I’ve been applying this knowledge to cities and other kinds of place.

I have enjoyed a long career in digital technology – over 30 years going right back to my first jobs as a teenager designing online Bulletin Board Systems and installing Word Perfect in offices – and so I bring a lot of different experiences and practices to bear on my work. I also studied inter-disciplinary Humanities as well as Computer Science at undergraduate level, and then Global Politics and International Relations at masters level, and so my intellectual background gives me a broad perspective on the implications and impacts of technology, as well as on the individual technologies themselves and how they work.

This is why I now help people to think about and understand those impacts, by giving them an opportunity to discover how technologies work and what people can do with them. I primarily do this via my digital capacity building agency Unfolding, but really I try to do this wherever and whenever I can.

Through the early part of my career, and after studying for a computer science degree, I transitioned from software engineering to information design, working initially in hypertext and multi-media authoring and then web design. In 1995 my brother and a few friends founded Shift F7 Design Limited in Marlborough, Wilts, and over a six year period we delivered web projects for a range of blue-chip companies, including Intel Semiconductors, Zurich Group, The Financial Times, The Royal Air Tattoo at Fairford and a host of others.

We eventually liquidated the firm in 2001, following the “dot com bust”, and I decided to return to university to study the Humanities, focusing on the history of Western intellectual traditions and modern politics.

Following graduation in 2004 I moved to Sheffield to be with my girlfriend and joined web development agency Technophobia Ltd. Over the next seven years I gained a masters in International Politics, married my girlfriend, bought a new house, helped to bring two amazing boys into the world, and participated in growing Technophobia from being a mid-sized agency into a large one, with over 100 staff and contracts well into the millions of pounds – initially as Head of Project Management, and then Director of Business Innovation, until the firm was acquired by Capita Plc for £6.7m in 2011.

I exited in November 2012, after the transition to new ownership and premises were completed. I was motivated by the idea that my young children would be growing up in Sheffield, not in a Plc, and that I should therefore be spending my time trying to improve the city’s opportunities, especially in digital technology. There was at the time a strong feeling that the city was falling behind other places, as impacts from the recession and government austerity were beginning to bite.

I had by then been loosely involved with local economic policy for a few years, and in 2013 was asked to to re-establish the Creative and Digital Industries (CDI) Sector Group on behalf of the Sheffield City Region Local Enterprise Partnership. This group was tasked with feeding new initiatives into the region’s Strategic Economic Plan. Towards the end of 2014, however, several of us felt that there needed to be an organisation in the city focused on the digital technology industries specifically, and began work on establishing Sheffield Digital as a trade association for the sector. We incorporated this organisation as a Company Limited by Guarantee in May 2015, and it is now a leading voice of the digital industries in the city.

In parallel with this, I was asked to help establish a University Technical College in the city to serve 14 to 19 year olds, which would open its doors in the autumn of 2013 and provide training in Creative Digital Media, alongside Engineering, as one of it’s specialist subjects. I am still a director of the multi-academy trust that runs this school, and we have since established a second centre at the Olympic Legacy Park specialising in Computing, Sports Science, and Life Sciences.

In 2014 I was asked by the Sheffield Executive Board (now the Sheffield City Partnership) to investigate the Smart Cities agenda and produce a draft framework for the city, which outlined how the city could benefit from the implementation of new technologies and how it should approach the transformation. This resulted in the SmartSheffield report, and has since translated into the regular SmartSheffield Meetup series, which I co-produce with Matt Proctor at Arup, and the dotSHF Digital Coalition which is a strategic collaboration between Sheffield Digital and Sheffield City Council.

In 2017, I joined Perform Green as an associate consultant specialising in ‘Smart Societies’, and have been part of several engagements with them including setting up the Digital Island Programme on the Isle of Wight, which is developing a regeneration and economic growth strategy with gigabit connectivity and the digital economy and skills at it’s heart.

Today, my practice is broadly focused on the digital development of places, with Unfolding as a capacity-building and training organisation providing interactive workshops on a range of topics to give leaders, teams and academics a better understanding of what these new technologies do, how they work and what the implications are. In addition, each commercial workshop also funds an equivalent community workshop in an under-served area, in order to spread understanding into places that are otherwise quite cut off from these types of knowledge.

Meanwhile my children are fast growing up, and the city of Sheffield is now booming, with cranes spanning the skyline, the city centre is undergoing a profound transformation, and the digital technology sector is at the heart of this resurgence. When I left Technophobia in 2012, local senior roles in digital tech businesses were quite rare and underpaid, and there was a strong pull to London and Manchester (which I worked hard to avoid). Nowadays I regularly see high profile roles posted on Sheffield Digital’s job board. Ironically though, where once I would have jumped at some of these opportunities, I now can’t imagine working full time for someone else. I enjoy what I do, and I now look for opportunities to work with other places and organisations, to develop their digital development strategies and help their people better understand how new technologies are transforming everything around them.

Please get in touch with me if you think my skills and experience can help you. 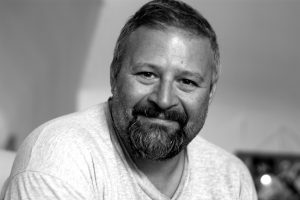